If you have allergies throughout the year, you could be allergic to what we call fungus or mold. Like other allergies, fungal allergy infections are triggered when you come into contact with what is known as mold or mildew, which is a form of fungi that is present and spreads in the air. Inhalation of the spores of the fungi can cause an allergic reaction in some people.

Allergic fungal infections usually affect your upper respiratory tract, and some can even cause inflammation to the skin. While most of these fungal allergy infections are minor and can be treated with medication, there are a few that can cause major health issues.

Allergic reactions to mold and other fungi can developed early in childhood, but some can occur even as the person ages. Some of the fungus allergy infections include

The symptoms of fungal allergy infection may differ from one person to another, based on the type of infection that the person has been affected with. Common symptoms that you should watch out for include

There are millions of varieties of fungi around the world. Anyone, regardless of age, gender, and location can get affected by fungi. People with weak immune systems are more likely to get a fungal allergy infection than those with stronger immunity.

Fungal allergy infection is caused due to different types of fungi that thrive in certain conditions like dry or rotten wood, wet or moist conditions, plants, and other pollen. Fungi spread and multiply through the spores that are spread through the air.

While some fungi like black mold can be toxic, others are less dangerous but cause discomfort in the patient. The most common types of fungi causing allergy and infection include Aspergillus, Blastomyces, Candida, Coccidioides (found in dry weather), Cryptococcus neoformans (found in soil), Cryptococcus gattii, Histoplasma capsulatum (bat or bird droppings), and Mucoromycotina (in decaying matter) among others.

This morning’s rush to the bread bin reminded me of a not-so-healthy nasal passage condition I researched years ago and thought vital to share… mold and not just the cute, furry stuff that lines your damp pavements but rather the growing, tiny, mushroom-like structures which when given the right conditions, such as our moist and dark nasal passages can simply take over!

That’s right, the mold I noticed on my bread can actually find its way into the delicate nasal and sinus passages resulting in fungal sinusitis. Although curable, this is a persistent condition which is difficult to rid the body of entirely. This is because when mold propagates, it releases millions of tiny spore-like structures which attach themselves to the mucus linings with anchor-type root systems… you could picture them as weeds growing in your linings but at a rate much faster than the pesky weeds on your driveway.

It was found in a study done by the Mayo Clinic that there is a link between fungal sinusitis and chronic rhinosinusitis.

So what are the common symptoms you say? These include swelling, inflammation and edema of the membrane linings which can cause one to feel blocked or congested. As Fungal sinusitis is related to allergies, common allergy symptoms may also be present. Most of all chronic sinusitis symptoms may appear such as colored nasal mucus, pressure, sinus pain, drained and tired feelings, a lack of energy, post nasal drip, fevers or high body temperature, sneezing and excess fluid secretions.

So even though there’s no hope for my cheese and tom sandwich due to the state of my bread, it doesn’t mean fungus located in your nasal passages is not treatable. There are numerous treatments which may be offered. These include steroids, immunotherapy, anti-fungal agents and anti-inflammatory therapies however as mentioned earlier, fungus is majorly tricky to fully get rid of because of their pesky spores so the chances of it returning are pretty darn high.

And what of natural therapies? One such therapy currently on the market is the Sinus-Pro, Fungus Allergy Remedy; a homeopathic preparation which works from the inside out helping prevent and halt the growth of fungal spores in delicate linings whilst also treating any inflammation or swelling caused by the irrigation that these spores have caused. This then also assists the body in safely shedding the spores as they are unable to attach in the delicate linings. What’s best about this treatment is that it does not have any nasty side effects which one often hears of with steroid treatments. This remedy can be found online at http://www.sinus-pro.com/remedies/fungus.asp

So I know fungi or as it is often termed mold, can grow in the body cavities and yes, it does cause the body to react in various ways but how can you tell if it’s just an allergy or a fungal allergy? One allergy is the same as the other isn’t it? 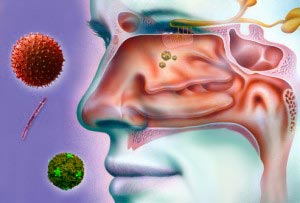 An allergy is basically an overreaction of one or more of the bodies systems to a harmful particle it comes into contact with. These particles by themselves are safe however in certain individuals the body perceives these as vicious body invaders and as a result starts to swell, becomes red, leaks excess fluid, cause sneezing, watery eyes, itchiness all over and results in you feeling pretty down.

Both fungal and normal allergies progress if not treated, both can be accompanied by yucky bacteria and both cause outrageously foul breath. Allergens, both fungal as well as pet dander, dust and foreign particles are airborne therefore easily contracted. The symptoms of both mold and fungal allergies are also the same however there is one main difference. Fungal allergies often lead to wheezing and a shortness of breath common with asthma type symptoms.

As these two conditions are so similar a visit to your GP or Specialist may need to be considered as they will be able to culture a sample from your nasal passages and sinus cavities to identify if mold is in fact present. Remember, fungi spreads easily with spores easily dislodged from their carriers. This means that even a small whoosh of air is all that is needed to disperse millions of spores ready to migrate into and flourish in deeper body recesses. Fungi is also extremely resilient as it grows like a plant with a root system to anchor itself into the delicate membrane linings. For more information on fungal allergies and treatments visit http://www.sinus-pro.com/remedies/fungus.asp